2008
A study “Micro-climate roosting preferences of the grey-headed flying-fox” was carried out in the valley and other locations. Microclimate_study

2007
Land added to Ku-ring-gai Flying-fox Reserve:
NSW Government purchased 4,400 m2 of privately owned land, previously designated ‘county open space’ to avoid development on this steeply sloping land which juts into the reserve. This bushland was incorporated into the reserve.

1995
Conservation Agreement Grant:
NSW National Parks and Wildlife Service (NPWS) provided a grant of $30,000 for research, interpretation and catchment management to Ku-ring-gai Council to assist in managing the reserve. Council, NPWS and KBCC representatives together planned the projects –

Ku-ring-gai Flying-fox Reserve was protected by a Conservation Agreement signed in February by the NSW Minister for Environment, Tim Moore, and the Mayor of Ku-ring-gai, Richard Lennon. The Conservation Agreement is attached to the title of the land and operates in perpetuity. It commits Ku-ring-gai Council to restore and maintain the habitat of the grey-headed flying-fox in the reserve and the Minister to assist with provision of technical advice and financial assistance to the owner to ensure provision of education opportunities and interpretation for the public regarding the flying-foxes.

1984
Report to NPWS by Dr A.N.McWilliam regarding Gordon Bat Colony was issued. View or download the report: Gordon_Fruit_Bat_Colony_Report_A_McWilliam_1984

1980 to 1981
As well as grey-headed flying-foxes, little red flying-foxes (Pteropus scapulatus) camped in Stoney Creek valley between 27 December and 4th February 1981.  Estimated number was 1200. (Puddicombe, 1981: visit the Studies and papers page to view or download this thesis.)

1977
Stony Creek was renamed Stoney Creek and registered by Geographical Names Board.

1950 to 1965
Flying-foxes camped near Browns Waterhole in Lane Cove River valley, about 6 kilometres west of Stoney Creek valley, which they used seasonally.

1947
Bushfires reported in the lower part of the valley near Bell Street.

1930
Bushfires were reported by residents to have occurred causing some damage to property.

1929
Water Board installed a major trunk sewer along the valley. 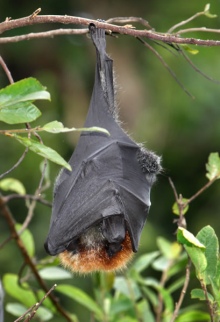