Pleasure and satisfaction are expressed by all who have contributed to restoring flying-fox habitat in Ku-ring-gai Flying-fox Reserve.  For a refreshing break each week join our friendly Bushcare team on Tuesday mornings. New volunteers register with Ku-ring-gai Council and learn bush regeneration skills on-site. We welcome new volunteers. Contact us to find out more about our bushcare project.

Volunteer bush regenerators commenced the habitat restoration project in 1987 with agreement from the land owner, Ku-ring-gai Council. Some came for a day, some for a year or two and others for decades.  So far more than 150 volunteers have contributed about 1000 hours per year to the project. In addition, there have been many bush regenerators who have worked for contractors or Council’s bush regeneration team. This project is one of the longest-running in Sydney and has been supported by many partners.

Aims of the project

In 1985 an ecological assessment by R Buchanan identified that the roosting habitat of the flying-foxes was threatened by the death of canopy trees and by weeds such as lantana, privet, morning glory and trad preventing the germination and survival of new canopy trees. Without intervention there would not be suitable habitat for the flying-foxes within 15 to 30 years. View or download the assessment:Buchanan_R_Gordon_Site_Assessment_1985

Following intensive bushland weed treatment by volunteers and contract bush regenerators, one third of the Reserve is now considered recovered and is under a maintenance regime. The regenerating canopy is closing and a multi-layer native understorey has replaced the dense weed infestation. Excellent regeneration of understorey and ground stratum plants has occurred, with planted canopy trees flourishing.

For more information view or download the article which was originally published in the journal, Ecological Management and Restoration vol 1 no 1 April 2000:KFFR_Habitat_Restoration_project_EMRVol1No1_2000

The flying-fox camp moves around the reserve. Although the bushland was previously dominated by sclerophyll species, the increase in nutrients contributed by the flying-foxes has resulted in weeds, particularly lantana, privet and trad rapidly dominating the camp habitat. Seeds of native trees such as figs and lillypillies brought by flying-foxes and birds are contributing to the development of a closed forest.  This rainforest-type habitat will be more sustainable for the flying-foxes in the future.

More action by all landowners to remove invasive weeds is urgently needed.  Some weed species could be eliminated from the valley if everyone participated.

In 1988 bush regeneration was in its infancy and Bushcare volunteers were very keen indeed.  For a 1988 viewpoint, enjoy this ballad written by one of KFFR’s early volunteers, Anne Ringwood. View or download: Ballad of the Bushsavers 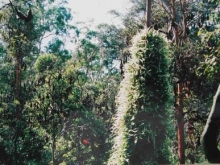 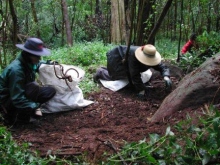 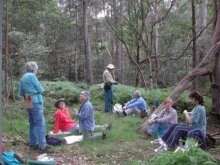 In 2008, the habitat restoration project in Ku-ring-gai Flying-fox Reserve was Highly Commended in the GRN’s Search for the “Top 25″ Australasian Ecological Restoration Projects. For more information visit: Global Restoration Network. 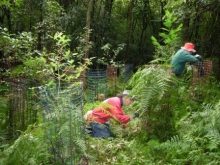 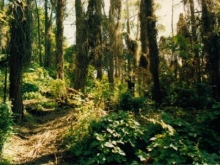 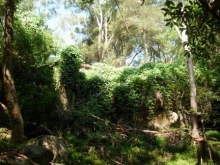