Until Covid restrictions are lifted to an extent that allows us to accommodate reasonable-sized groups at the local scout hall, regretfully, we will not be able to schedule any further Meet a Bat Nights. We really appreciate and thank you for your patience and understanding! 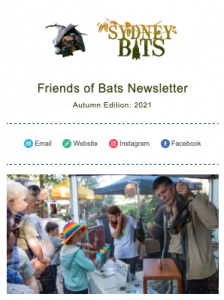 Stay up to date and find out what we’ve been up to in our latest newsletter! Missed our last issue? You can catch up and read more here

Find out what’s been happening with flying-foxes at Ku-ring-gai Flying-fox Reserve, with this update from Nancy, including repairs of storm damaged exclosures, new volunteers, and exciting bird observations… read more 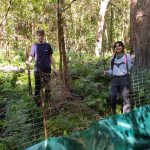 The aims of the KBCS Inc. are :

Bats are important because…

Nectar and fruit feeding bats are vital to forest regeneration as pollinators and dispersers of rainforest seeds. Insect-eating bats play an important role in the natural control of insect population.

HANGING IN THE BALANCE Documentary: Winner of the Best Film Award at the 2014 Cause Film Festival featuring Sarah Curran (deputy chair of KBCS).

NO TREE, NO ME Tim Pearson, wildlife ecologist (and KBCS chairman) speaks on behalf of Bats to an appreciative audience in Canberra. News feature filmed for Globo TV in Brazil about at Centennial Park camp, Gordon camp, and the Australia Walkabout Wildlife Park at Calga. January 2020 update to members past & present

An important message from our Chair, Tim Pearson, looking at the state of things in 2019 as well as the recent / ongoing summer heatwave conditions...read more

More information about living in close proximity to flying-foxes...read more

Bushcare has been cancelled until further notice due to COVID-19. But we are keen for more volunteers once we can resume work, to replace trees damaged by recent storms this past summer! Find out more about how you can help!

A non-profit community organisation working for the conservation of all bat species, especially the grey-headed flying-fox. The continued work of KBCS Inc. relies on funding from government grants and public donations.

Recorded by Tim Pearson at Bellingen at midday in May, you can hear a variety of flying-fox vocals, ranging from little squeaks and squeals, through to what sounds almost like a donkey braying. Eastern Whip-birds are also calling in the forest. Download audio
Read more about bat vocals here