Estimates of abundance of the grey-headed flying-fox population were undertaken between 1998 and 2005.  These ‘counts’ showed there are discernable shifts in the population.

In most winters the animals concentrate along the coast in northern NSW and south-east Queensland.  The only camps south of Wingham Brush which were occupied were in highly urbanised areas of Sydney and Melbourne where food is available from gardens and street plantings. These camps have been occupied during winter only since 1980 and their combined winter population accounted for only 10 to 12 % of the total.  An exception to this general pattern occurs in some winters when spotted gums flower spectacularly on the south coast of NSW.

In autumn grey-headed flying-foxes are more dispersed and more likely to be in the southern portion of their range than in winter.  They occupy about twice as many camps and it is not uncommon for large camps to be located south of Sydney. At this time of year only 10 to 12% of the population is in Queensland.  There are few camps which have been used every count and a large number that have been occupied only once. (from reports by Dr P Eby)

In 2010 prolonged heavy rain and flooding in Queensland and northern NSW signalled the breaking of a long drought.  Food for flying-foxes was scarce. This resulted in starving flying-foxes moving inland and south.  Flying-foxes were reported feeding on eucalypt blossom in inland towns such as Orange (NSW) and Bendigo (Vic).  They also ate apples in orchards in Orange, Tumut (NSW) and Gippsland (Vic).  One was found dead in Hobart and several were fed grapes by workers on an oil rig in Bass Strait.

according to availablility of food  – such as Turpentines which flower in Spring. 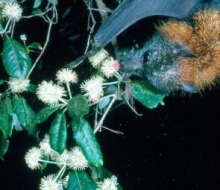 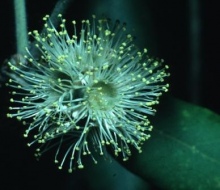