Flying-foxes carry pollen and seeds over large areas, contributing to the genetic health of forests and woodland.  Grey-headed flying-foxes feed on the flowers or fruits of more than 100 native plants, mostly trees.  Each tree species flowers at the same time to attract pollinators. Most of these plants are dominant trees which are structural elements in forests and woodlands.

Read more about a study of the pollination of eucalypts by flying-foxes, undertaken in northern Australia: McCoy_Pollination_of_eucalypts_by_flying-foxes_1990

When do they feed?

What do they eat?

Is their feeding territorial?

How do they drink? 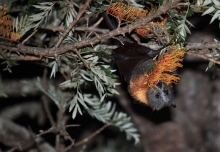 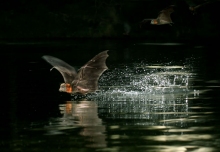