Although Flying-foxes are nocturnal, a camp during the day is a busy place. Just as we socialise at night, flying-foxes spend part of their day sleeping, and part of it interacting with their neighbours.

They are very vocal animals (it’s been estimated that they have between 20 and 40 different vocalisations, more than any other mammal except some primates), and any social interactions usually involve some vocal communication.

Sometimes it’s just a brief squabble over roosting space (“You’re in my way!”, or “Leave me alone!”) but from March through May, it’s mating season, and the boys only have one thing on their mind. They are desperate to let every other male know that this branch is their territory, and also to let every female within earshot know that they are a worthy mate!

Bellingen bats in the morning 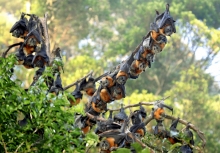